Looking at the slide we will be using to build our new laser cutter. The beginnings of a real world video game Colouring and the start of a dart board clock The internals of a real life loveable BMO from Adventure time A cape for a convention outfit Making a new ground sheet for a tent Our Open Nights are every Wednesday evening, from 6.30pm onwards.

These photos are just a taste of the varied projects you can see people working on. As always, if you plan to come along, be sure to bring a project with you.

We’ve come a long way since then becoming the UK’s largest Hackspace in early May 2011. Here are some of the best bits from the year!

In January we sent a cupcake to LVL1 in Louisville Kentucky for the Global Hackspace Challenge. We managed to come 3rd somehow!

In February we went down to London Hackspace to celebrate them expanding into another unit at their business centre. Here is a picture of Michael inviting us to “Blog that Shhh!” 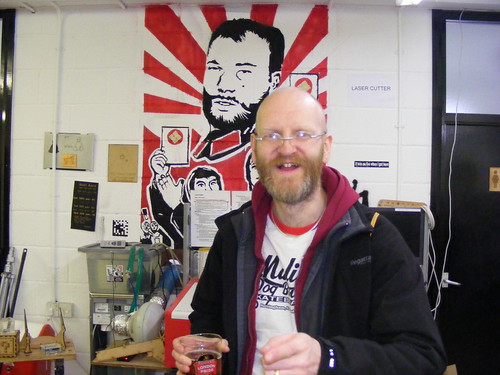 In March we went to the Maker Faire UK in Newcastle it was great fun, you really should join us at the next one! 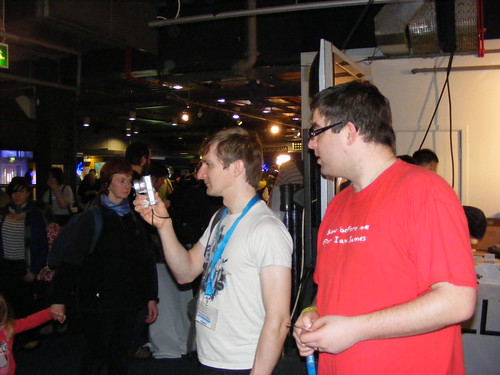 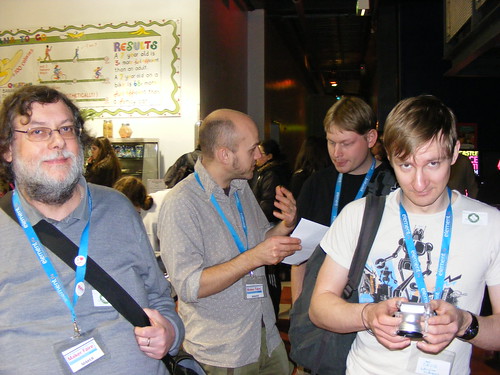 April was when we learned we’d been evicted from the Art Org and we suddenly found ourselves with a massive challenge to find a new home. David managed to get us feature on BoingBoing.net!

… and we went for this big space!

Amazingly we managed to pull it off thanks to lots of very cool people sending us money. We moved in on 2nd May 2011. This video is a tribute to them!

In July we hosted the Nottingham BarCamp our first major event at the space. 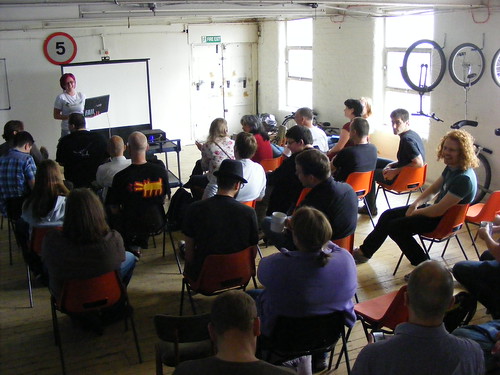 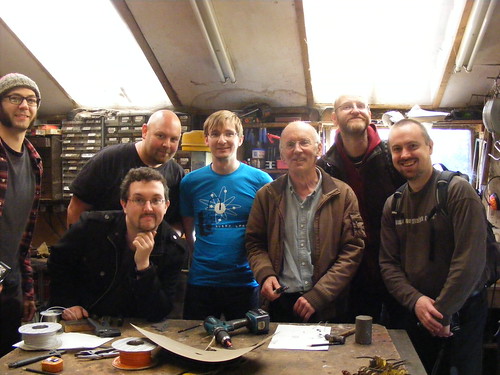 …we’ve become friends with Tim Hunkin and we hope to work with him more in the future. We agree generally with the principles of Mr Stallman and were honoured by his attendance, though we feel that RMS should also recognise that whilst software should be free, manners already are!

In September we headed down to Brighton to visit Build Brighton AND the Mini Maker Faire! David tested his 3rd person camera rig! 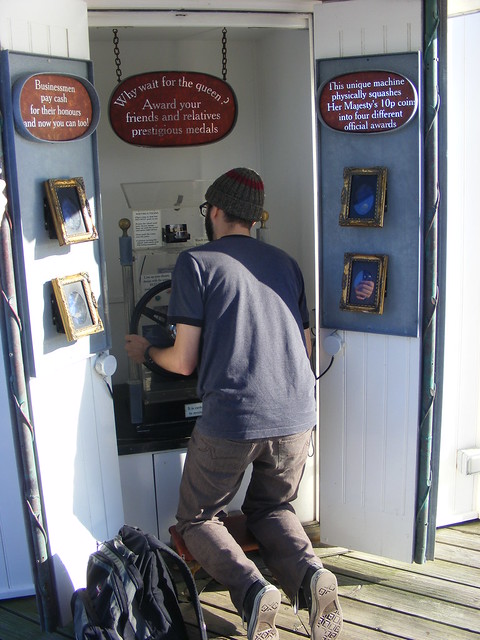 We’ll be going again in the Spring of 2012, look out for updates.

In November we managed to purchase a major new tool by asking for pledges! This puts us in the big league! 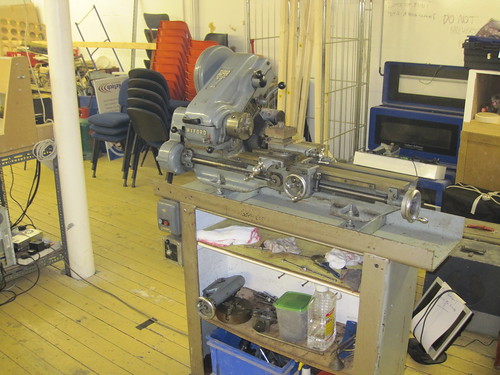 and in December we celebrated Festivus! Make your new years resolution to visit Nottingham Hackspace!

This afternoon I had a meeting with the folks at Bizspace and an agreement was made that means we will be moving into Roden House at the end of April.

Our new address is:

(we’re exactly below the Rollo Accademy of Performing Art)

We have been delighted, encouraged and sometimes humbled by the donations we received. Particularly poignant were the donations from Hackers in Japan which we found extremely thought provoking.

We’d particularly like to thank BoingBoing.net, London Hackspace and NYC Resistor for their help. So many of you donated to the PayPal and bank account that it will take us a couple of days to list and note everyone and ensure we’ve spotted the new membership payments too.

We currently worked out that we received £780 in PayPal donations and about £1ooo in bank donations from both members, friends and well wishers. We’ve managed to top up the rest we required for the deposit with membership fees and workshop admission charges that we’d bank over the last few months!

Our very last Open Hack Night at the Old Police Station on Station Street Nottingham will be on Wednesday 27th April (tomorrow). We will be moving the Hackspace “stuff” to the new space on Sunday 1st May (all day long).

We still welcome any donations and gifts we’re particularly keen to increase the amount of furniture, tools and equipment available to members and guests.

Our first Open Hack Night in the new space will be Wednesday 4th May 2011.

Last week we were told that we’d need to leave the Old Police Station by the end of April. Since then we’ve been working with The Art Organisation to arrange new accommodation for Nottingham Hackspace.

Yesterday we were pleased to make a new arrangement with The Art Organisation to move in to the basement level of the Hopkinson Gallery also on Station Street.

We’ve got some early pictures of the basement (remember it needs work) here on Dominic’s Flickr.

On the Open Hack Night 6th April 2011 (tonight) there will be a chance for you to look round the basement at The Art Org. We hope to bring you a schedule for the work that needs to be completed and details of the dates of the move.

We will be having a Hackspace warming party and official Nottingham Hackspace 2.0 opening on a Sunday in May (watch this space for more information).

Over the next month we’ll still be looking for new members and organising some workshops. We are currently planning a “Hackspace Wearables” workshop to include how to do “on the cheap” screen printing, working with EL Wire and Lillypad Arduino also a chainmail workshop and Atari-Punk-Console workshop…

So a lot happening. We can’t wait to see you at the new Nottingham Hackspace soon!

Early on Wednesday morning 30th March 2011 we had a call from The Art Organ about their tenancy on the Old Police Station 3 – 9 Station Street in Nottingham.

The Art Org are still committed to finding Nottingham Hackspace some space with in it’s buildings and we hope to have news very soon about our new rooms! Our first priority is to ensure we have a place to hack, that is open to our members when they need it. Our second priority will be to try and stay as close to Nottingham station as we can.

In the meantime it’s Hacking as usual at the Old Police Station and we’ll continue to have Open Hack Night on Wednesdays!

It is with great regret that yesterday we recieved information from the Landlord of 3 – 9 Station Street that he will be drawing our lease to a close much earlier than expected. This is due to the impending need to upgrade this building.

Unfortunately this has come with some deadlines for each floor of the building, affecting some much sooner than others due to the schedule of work the landlord has planned.

Ideally we will look to vacate all studios by the 30th April as to not incur any further costs or fees for this building.

These dates are not negotiable and the landlord is within his right to give 4 weeks’ notice as underserved as this may seem. For most people there are some other options and we will help to relocate where possible.

We want to take this opportunity to thank you for your support with the project in 3 – 9 over the last number of years and we are dissapointed that this building has to come to an end, after so much tijme and effort has been spent on it. As you know we had much bigger plans for the project within this building and we did not anticipate having to vacate so soon. Get the basics of PCB (Printed Circuit Board) manufacture from Nottinghack’s Matt Little (from our Soldering & Drawdio Workshops).

There are many processes and techniques for making a printed circuit board (PCB).
In this session Matt will guide you through his process for making PCBs

Matt uses a mixture of home-made and bought tools. He will highlight some of the problems and share some of the tips and tricks he’s uses.

You will get to create and keep a circuit board for a simple LED flashing circuit (components included).

The circuit board layout is made using the open source software called KiCad (for both Linux and Windows). If you have a (small) circuit you would like created then bring along your completed PCB design and we can make that with you!

END_OF_DOCUMENT_TOKEN_TO_BE_REPLACED The Challenge is to mail spending less than $50 a cake to another Hackspace that is at least 1000 miles away… It should taste great and arrive in pristine condition.

Our challenge partner Hackerspace is LVL1 the Louisville Hackerspace in Kentucky USA. They are nice folk and well worth a follow on Twitter @lvl1hackerspace

END_OF_DOCUMENT_TOKEN_TO_BE_REPLACED Come to Nottingham Hackspace and learn a method that you can remember! Group & 1-on-1 tuition will be provided. Costs £4 including a speed cube for you to keep.

Don’t want to join meetup? Go to our facebook page and sign up there and we’ll add you to the guest list. Places are limited so please register now to avoid disappointment!