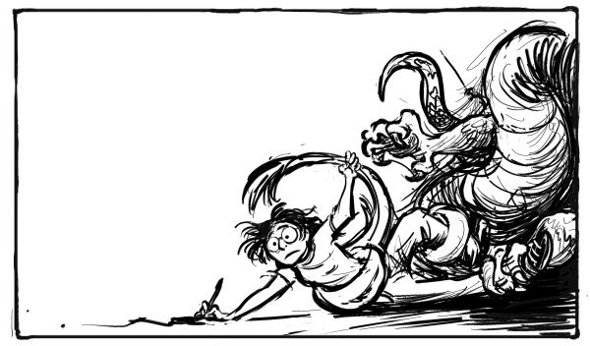 Kate Bolin told me she waited through ALL the credits of “Clash of the Titans” (the recent one) to see her favourite webcomic artist’s name on the big screen. With a cult following in the Hackspace movement if you’ve not read Sydney Padua’s fantastic 2D Goggles you are missing a treat. We were delighted to hear that Sydney is working on a print edition of “The Thrilling Adventures of Lovelace and Babbage” which might be available as soon as the year 2013! Nottinghack dropped Syndey an email with a few questions…

In the unlikely event that anyone reading this hasn’t heard of 2D Goggles can you tell us a little about it?

2Dgoggles is a webcomic (and soon a book!) that concerns Victorian mathematicians Charles Babbage and Ada Lovelace, in pocket universe where they build a giant computer and fight crime, clients, street musicians, and each other. I do a ton of research for it and I am the world’s leading expert on Charles Babbage’s hair. Come for the comic, stay for the footnotes!

Did you know that your work has been reproduced at London Hackspace? Could you tell us a little about what you think of the Hackspace movement?

Yes the mural looks awesome! I love the idea of hackspaces, it’s a great resource for those of us deprived of sheds. I can’t wait to get up to Nottingham, which I intend to do at the first available opportunity- not only are you located near the resting place of Ada Lovelace, I understand you have both beer and lathes.

We’re very excited to hear about you going into print in a year or so, you must be thrilled?

Oh, very thrilled! And also kind of daunted! When I started the comic it was literally a joke.. then it became a kind of an obsession.. but I never set out to do a graphic novel. Pantheon is a terribly distinguished publisher with a list of graphic novel luminaries, so both a huge honour and a lot to live up to.

Oooh, let me think..something to make decisions for me! A Magic Eight Ball (do you have those here?), containing a supercomputer that could generate accurate projections of the future and tell me what to do.

What kind of things do you think Babbage and Lovelace would be making if they were hackspace members today?

Heh.. Babbage would have to be making the next thing that nobody could understand what it was. I think it would be too advanced for my puny brain! Lovelace would be making it even more baffling, but I think on the side she’d be making flying machines.

Bad music AND bad poetry– maybe I should have Lovelace and Babbage join forces against musicals!

What question do you wish you’d been asked?

Uuummm.. Sydney, do you happen to know what Ada Lovelace’s toothpaste consisted of?

Could you answer that question?

Why YES! Yes I do! Buy the book to find out what!