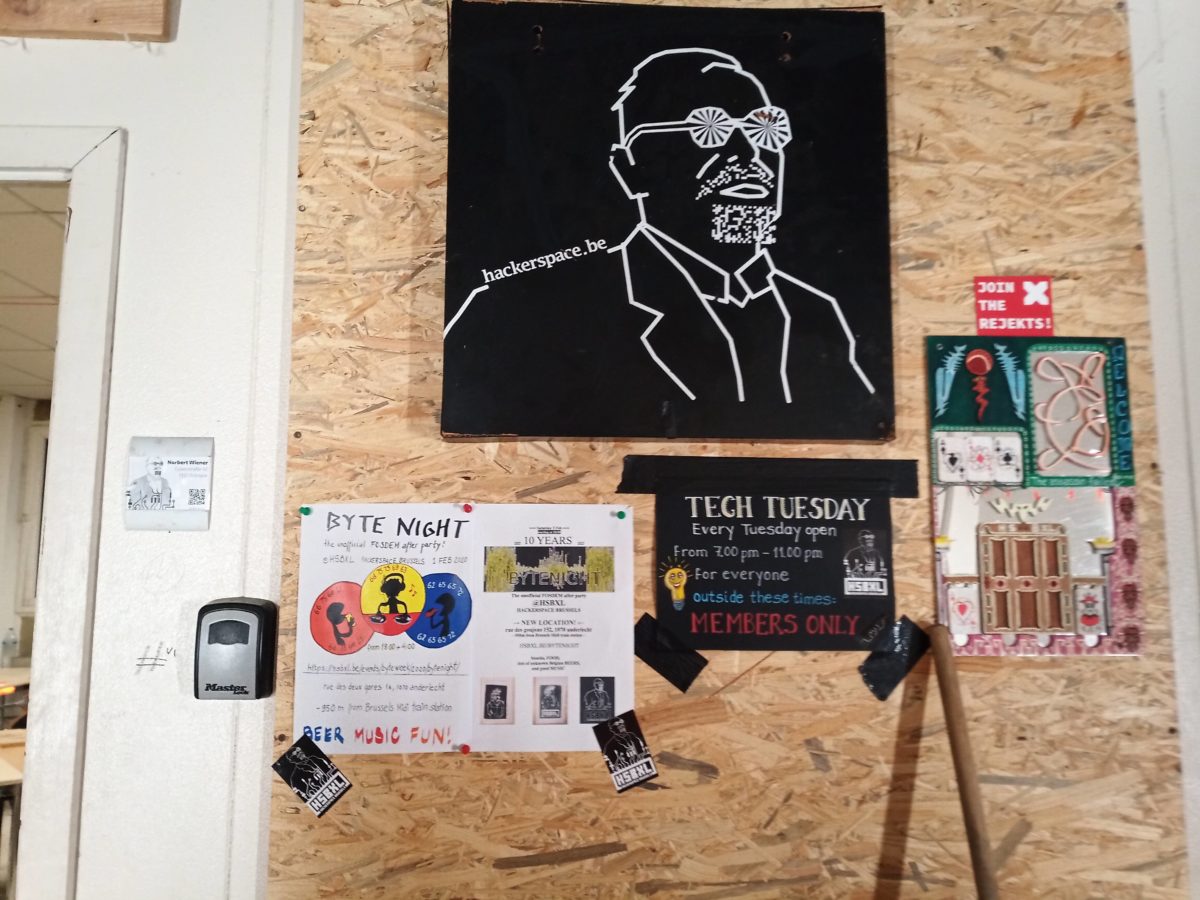 Posted on February 9, 2020 By Samathy Barratt

I got the opportunity to go to Hackerspace Brussels while I was visiting Belgium for FOSDEM, a massive Free and Open Source Software conference.

HSBXL is in a very weird building some 900m in an out of town direction from Brussels Gare du Midi.

Following the sign on the gate that says “For HSBXL, go towards the rabbit” you make your way through a skate-park towards a door next to the large mural of a rabbit on the wall of a brick building. Entering the door, you walk up numerous flights of stairs in an industrial building that would seem abandoned if it wasn’t for the working, albeit temporary looking, LED lighting.

Flight after flight of stairs later, we reach the top floor and follow the signs through a weird building-site like space containing an, uh, inside greenhouse? I’m sure its all fine.

Brussels Hackspace is entered through a doorway with a woolen blanket for a door.

The hackspace itself is only 2 rooms. One large room containing mostly communal work area with tables and chairs. Featuring a bar covered in stickers at one end, and an electronics workspace at the other.
Filing cabinets of stuff line the walls.

At the far end of the room is a doorway with the messy area behind it.
It looked to contain only a few tools. A 3D printer, CNC router and pillar drill, but there might have been stuff I couldn’t see.

They have plenty of space to expand with more tools and stuff if they want! I gathered later on that Hackerspace Brussels had only recently moved into their new address, perhaps theres more tooling to be moved in.

I spoke to an ex-board member, Tom, who told me Hackerspace Brussels only has about 35 ‘members’ and is still in the stage of existence where the space really is ran by everyone, although they do have a board.

For the FOSDEM conference, Hackerspace Brussels was hosting a large party with live music, for which they were using some more of the space on their floor. Although I’m told that’s not technically part of their Hackspace.

They had outfitted this area with lighting and a bar serving exclusively Belgian beer, Club-Mate and Lipton. In fact, the bar itself was made from very hacker-esque crates of empty Club-Mate bottles and an old door for the top.

Tom told me about Hackerspace Brussel’s presence at EMF last year, and that they’ll likely be there again this year in the Belgian Village. So look out for them if you’re going!

Visiting Hackerspace Brussels was a super interesting look into a Hackspace which is in a stage that Nottinghack hasn’t been in for almost 10 years.
Its a tight knit community that still felt unoquivocally like a welcoming hackspace, despite it being small, quiet and in a significantly weirder building than Nottinghack!